One of the most frequently asked questions by customers has always been “what is the craziest thing that has ever happened?” For a long time I always told the story from the blog post Not A Good To Die. That situation was crazy, scary and usually very entertaining to the customers. That story was recently eclipsed as my craziest cab story.

It had been a slow morning and I was beginning to worry about even making my lease. I had been out for four hours and I had picked up one person for a six dollar trip. I was sitting in a parking place on Highland Avenue and had just finished my lunch. Tom and Jerry’s Chevron offers a sweet hot dog deal. You have to make them yourself but two dogs with all the trimmings and a bag of chips for a buck ninety nine, can’t beat it. A call finally came through in the 120 zone. It was an account trip, a trip paid for with a voucher by the account of a business or institution. It was to St. Vincent’s, the big Catholic hospital in Birmingham. I like account trips because they’re often long trips and you don’t have to worry about getting paid whether your rider has any money or not. A few months earlier I had gotten an account trip out of this same hospital that went to Moulton, a small town in the northwest corner of Alabama. That trip had paid me one hundred and seventy dollars.

I could tell something was different when I pulled up in front of the hospital. You usually have to wait several minutes for nurses to wheel your customer out and help them get in the car. This time I was greeted by a security guard. “Are you here for Miss Emma?” Yes, I told him. He handed me the voucher which had NO STOPS written across the top in big letters. “Don’t stop anywhere and don’t take her anywhere but home” he said. Emma was a white woman of about sixty. She was small but had a fiery look about her, she seemed to be speeding ninety to nothing. Her home was in McCalla. This made my eyes light up because I knew this would be about a fifty dollar trip, just what I needed after such a slow start to the day.

“I ain’t lettin’ them zombies do that to me.” What? I asked. “Them folks at that hospital, they all zombies. They want to do all kinds of terrible thangs to me. You don’t blame me for gettin’ outta there do you?” What were you in there for, I asked. “They said I had a heart attack but I don’t thank I did” Now I knew that I had a real doozie on my hands. My plan, as it always is when I get someone like this is just agree with what they say and get them where they’re going ASAP and then get the hell away. Yeah, you right, I said. That’s my standard answer when someone asks me a question this crazy. The last thing you want to do is start an argument. “Them zombies was walking around with them holler eyes, all wantin’ to stick needles in me and wantin’ my blood. They was scaring me. You don’t blame me for gettin’ outta there do you?” No, I don’t blame you a bit. Sometimes you just gotta go.

I had set my GPS to the address provided and was headed out I-20/59 toward McCalla. “I want you to take me by my brother’s house, he lives in Hueytown. I want to tell him what them folks was trying to do to me.” I told her that I could only take her to the address on the voucher because the hospital was paying for her trip. I said if you were paying for it I could take you anywhere but when they’re paying I have to follow their instructions. “OK” she said weakly and was then quiet for a couple of minutes. We soon passed the Valley Road exit in Fairfield. “That’s where you get off”, she said. No it’s not I told her. I’m following my GPS. I asked her if she lived at the address provided. “Yeah, but that’s where you get off.” I said I’m taking you home, we’ll be there shortly and you don’t have to pay for it so it really doesn’t matter which way I go, does it? When we approached the Allison-Bonnet exit to Hueytown, where she had already said she wanted to go, she became even more agitated. “That’s where we going, get off here, that’s where I live”. I said I can’t, the hospital guard told me specifically not to take you anywhere but to address on the voucher. “That’s where it is! YOU GOIN’ THE WRONG WAY!” she screamed.

She was strangely silent as I passed the exit. She was silent for a few minutes and I was able to drive for a couple of miles. I was in the right lane doing about seventy down the interstate when I heard a strange sound from the backseat. I turned around to see that she had the door open and was preparing to take a flying leap. I immediately hit the brakes and steered to the shoulder. Before I could bring it to a complete stop she was out. I could see her in the rear view running in her long colorful dress at first down the shoulder and then out into the highway, out into traffic! 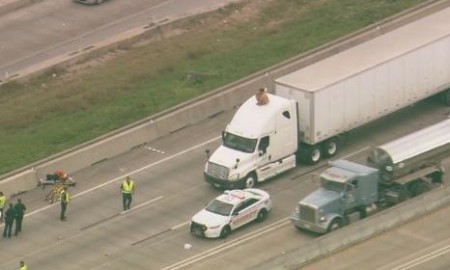 I was screaming at the 911 dispatcher. SEND SOMEONE NOW! SHE’S IN THE MIDDLE OF THE INTERSTATE AND THERE’S HEAVY TRAFFIC! PLEASE SEND SOMEONE NOW! I was hearing the chorus of all different tones of horns as I saw her in the mirror holding up both arms out in the middle of I-20/59. I heard the air brakes and long horn blowing from an eighteen wheeler that was making his best effort not to splatter her all over the road. Just as I was sure I was about to see body parts flying and witness her death on the highway, I saw a fire truck pull off the road near where she was standing.

The short, stocky, middle aged firefighter heroically ran out, grabbed her and pulled to the side of the road. When he pulled off the road, a fire department Tahoe driven by a woman who worked with the fire department pulled off behind him. To avoid rear ending the fire truck she drove the Tahoe into the soft mud of the ditch beyond the shoulder. It added a bit to the excitement of the moment to see her futilely trying to get the SUV, with it’s red lights blazing, out of the ditch. As I’m quickly walking toward the scene I can see my customer lying on the side of the road completely limp. I thought well, she’s dead. Maybe she really did have a bad heart and she’s had a heart attack and died.

The driver of the Tahoe finally abandoned it and joined me to see what was happening with my customer. She sat up just before we reached the scene. I told the fire fighter what had happened and he said “yeah, she said you were trying to kill her. Don’t worry about it, she’s mental. I had a call out to her house yesterday. They took her to the psych unit at Brookwood, I don’t know how she ended up at St. Vincent’s.” By this time several police cars and ambulances had showed up. I asked the policeman if he needed any kind of statement. “No, you’re good to go” he said. I drove down to the next exit, and headed back to the Ham, with a brand new craziest story to tell.

*all views and opinions are strictly those of R.W. Walker and do not reflect the views or opinions of any cab company.