I guess I never thought about it before I started driving cabs, but one thing all blind people have in common is that they can’t drive. I’ve picked up several blind customers since I started driving, some with guide dogs and some without. I don’t remember the circumstances of the first time I picked them up, but Earl and Brenda would become my longest lasting regular customers. I’ve never asked them their ages but they appear to be in their late sixties or early seventies. They’re both blind. 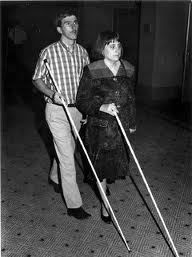 Brenda said that she gradually went blind from the eye disease retinitis pigmentosa when she was a child. By the time she was seven years old she was completely blind. Earl had some kind of cancer of the eyeballs when he was a toddler, his eyes were removed and now he wears two glass eyes. Brenda has some light perception. She can tell day from night or when it’s sunny or overcast. Earl, of course, cannot; his blindness is complete. They’ve only lived in Birmingham for a little more than a year. They moved here because their son, Kevin had moved here after marrying a local woman.  Brenda and Earl wanted to be near their son. Kevin is also blind; he inherited his mother’s RP and went blind at an early age, just as Brenda had. They moved from Chicago where Earl had worked for a major university in a program that taught the blind to use computers, among other things. He’s now retired. I don’t think Brenda has worked much outside the home.

This couple has given me a valuable education about both the special needs and the normalness of the visually impaired. Brenda has a German Shepherd guide dog named Chloe. To be quite honest, Chloe isn’t the brightest guide dog that I’ve ever seen. Many times on our outings I find myself quite literally leading the blind. Sometimes I find myself leading the guide dog also.  As I’ve already said, these folks can’t drive. They’re completely dependent on others to take them everywhere they go. Believe me, they go plenty. They live in a relatively new brick house in a cookie cutter subdivision deep in zone 235. There are many doctor and dental appointments, vet trips for Chloe, trips to the bank and trips shopping. Yes, shopping. Brenda loves to shop. There are certain stores that have employees that will stay with her during the trip and find the stuff she’s looking for. Yes they do use such phrases as “looking for”, “see you later” ect. They also travel, which was a bit of a surprise for me. They go back to Chicago every few

months to visit friends and relatives but their absolute favorite destination is the Epcot Center at Disney World in Florida. Apparently, the Epcot Center has representations of many nations. They can enjoy the food, music and other sounds, smells and tastes of other cultures without actually traveling abroad. When they take these trips I usually pick them up at the airport. I find them, find their luggage at the baggage claim, guide them back to the car and get them home safely.

It’s more important for blind people to find regular drivers and other service people than it is for sighted people. It’s important for them to build relationships that build trust. They can’t feel the difference between a one, a ten, a twenty or a hundred dollar bill. They have to trust people to tell them the truth. They can’t tell one credit or debit card from another without some difficulty and they always need help at the ATM. These are things that require trust, things that almost no one would feel comfortable letting a complete stranger do. They’ve told me that they save up their mail for about two weeks at a time and then have a “reader” to come to their house to read it to them. Although they’ve never mentioned it, I assume they also have sighted people helping with laundry, matching their clothes and cooking. Brenda does buy foods at the grocery store that require prepreation and cooking. Other than sometimes being covered with dog hair from Chloe, their clothes are neat and clean and never grossly mismatched. This couple is living in a strange place in a region they’re not used to. They have few friends or relatives to help them with daily life. I admire their strength and courage.

Sometimes the fact that I can be of service to people who truly need my service and to be trustworthy to those who need trustworthy people the most can be very satisfying. It makes me feel as if I’m doing something truly valuable to others, whether or not there is great profit to be made. Recently, a friend who is a long time taxi driver called me to ask a favor. He said that he was away on vacation but he had been informed that one of his regular blind customers had been taken advantage of by some scumbag driver who had answered the dispatch to pick this guy up. I’m not an extremely religious person but I’d like to think that there would be a special place in hell for any despicable piece of crap that would steal from a blind person. My friend ask if I could go by and pick Charles up and help him with his shopping and banking routine since it would involve money and shopping. I agreed.

I watched him carefully as he made his way down the steps in front of his house to the sidewalk. He had a collapsible red and white cane with a little ball at the end that he used to find his way down the steps while holding onto the rails that looked like they had been put there just for his benefit. Our first stop was at the bank where I filled out his checking withdrawal slip in order for him to get the cash he needed for his shopping. I was almost hesitant to ask when I got to the line where I had to fill in the account number. He said “I don’t know the account number, just put my social security number on it and they can use that.” I wrote the number on the slip and then made a conscious effort to forget it. Our next stop was a large grocery store in the Five Points West area of Ensley. Unlike Brenda, who usually called ahead to the grocery stores to make sure that they would have someone there to help her pick out her groceries, Charles was depending on me to do this for him. I guess my friend had been doing it for him in the past. Charles hung onto my arm as we negotiated the aisles of the big store. I was able to find everything on his mental list in a relatively short time. When we got to the checkout it was time for him to put his trust of me to the test. He took money out of his pocket one bill at a time and asked “what’s that?” with each one. I said, that’s a fifty Charles, give it to the cashier. After repeating this exercise about three more times, the grocery bill was paid. The next stop was at a dollar store.  I went in while he sat in the car, bought a phone card and then put the minutes on his phone. There were then two fast food drive through trips where it seemed to me that Charles was buying enough food to feed an army. I guess it was stuff that he expected to last for a while, since getting out of the house was a major effort for him. I dropped him off where I had picked him up and carried his groceries in the house. Even though he did pay me for my service, I felt as if I had done my good deed for the day.