To my knowledge, there has only been one time when someone has called the cab company and tried to get me in trouble. This person wasn’t even a customer. I’m somewhat of an amateur photographer, I like to take pictures of scenes that in my mind at least, tell a story. Pretty things, ugly things, gritty things, shiny things, I have pictures of it all. Sometimes I take my good camera with me in the cab and sometimes I just use my phone. I have a digital album that I call Inner City Expressions. It contains images of mainly graffiti and murals that I’ve seen around town. Some of it is very artful, some is very crude. On this day I noticed a scene that I thought would fit well into that album.

I received a call to one of the large bank buildings near the railroad tracks that divide north from south in downtown Birmingham. After requesting a call out and waiting about ten minutes it became clear that this call was a no show. In order to stay in zone 120 I needed to turn around. I knew that the cross street next to the building was a dead end. The street ran under two bridges that crossed the railroad. The turning around place was just beyond the second bridge. I caught something out of the corner of my eye. Once I turned around and drove back under the bridge I stopped to get a better look.

Someone was living under this bridge. There was a tent set up with all kinds of miscellaneous items scattered around. Their furniture was a few old rickity office chairs and at least one lawn chair, the cheap kind with an aluminum frame and polyester strips. There were at least two grocery carts parked near the tent. There was a large red and white cooler sitting in front of one of them. There was religious themed graffiti on the concrete structure of the bridge. The words “Hurricane Bless” were painted vertically on one of the pylons. There were references to bible verses from the books of Revelations, Exodus and Isaiah as well as a line that said “Jesus loves Randy” painted on other parts of the structure. I didn’t see any people around, I took my camera out and snapped a couple of pictures. 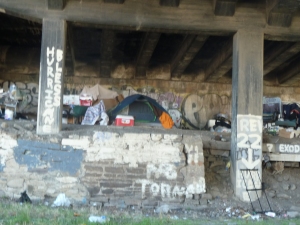 Just as I snapped the second one I heard a deep male voice yell “Hey, what chu’ doin?” I drove away thinking that would be the end of it; it wasn’t. By the time I stopped at the first traffic light I got a call from the dispatchers telling me that an irate woman has just called complaining that I had been taking pictures of her house. I guess when you’re driving around in a brightly colored car with an identifying number and a huge phone number painted on the side it makes you vulnerable to these kinds of calls. I told the dispatcher that it could have very well been the woman’s home but that it wasn’t a house. It was a homeless encampment under a bridge. That still wasn’t the end of it. A little while later I got a call requesting that I call the general manager at the cab company. This woman had also called her and told her that I was taking pictures of HER! Not the encampment, not her house, but HER!  As I said earlier, I never saw a person at the encampment. Once I explained the situation to the manager, she didn’t seem too concerned about it.

I know for sure that it’s not illegal to take pictures of anything or anybody as long as you don’t take the pictures from the property of the person or business that doesn’t want to be photographed. Think about Google Earth.I remembered this from a previous job that required me to take photographs of businesses. On the rare occasion that someone refused to have their business photographed, we still had to take pictures of the exterior. Our instructions were to go across the street, off the property and take the pictures. One thing that almost certainly IS illegal is to live under a bridge on city property without a permit.

I truly do have compassion for the homeless. I’m not one of those assholes that would snarl “get a job” as I walk past them. I meant the people living under this bridge absolutely no harm. At first it pissed me off that they would try to get me in trouble. If they wanted to play that game I could almost certainly make more trouble for them than they could for me. Once I calmed down I realized that these people felt that their privacy was being violated just as I would if someone were taking pictures inside my windows. Just out of curiosity, several months after the incident I decided to drive by to see if they were still there, they weren’t. All their stuff was gone and the level place under the bridge was cleaned out. The graffiti remained, but with a few changes. There were some words that I hadn’t noticed the first time, something about God and tornadoes. I immediately noticed that the word “Bless” next to the word “Hurricane” had been painted over. I guess they thought their blessings had run out. 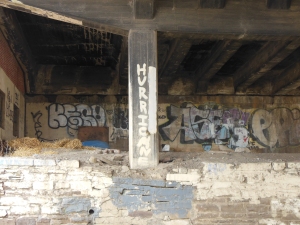 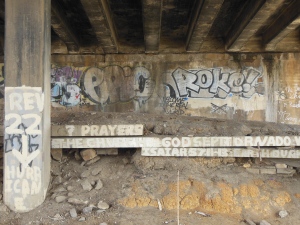